A patchwork of highways frame Omaha, taking you anywhere in the city in 15-20 minutes.  With a population over 400, 000 it’s a quiet city with minimal traffic.  (A most welcome change from Seattle’s constant gridlock).  Rolling hills break from the traditional landscape of the Midwest.  A lazy Missouri River rolls to the East, keeping Iowa at bay.

Omaha is hot pavement, with nary a tree in sight.  I can’t imagine how barren winter must be, once the few deciduous trees drop their leaves.

The Gene Leahy Mall of hand-crafted waterfalls, and artfully cascading steps, point to a condensed cluster of downtown high-rises.  The buildings huddle together in defiance of its surrounding agricultural communities.  (Even the ever-present grain silos wink at the traveler driving East into the city.  Dressed up in the urban-chic of commissioned graffiti). 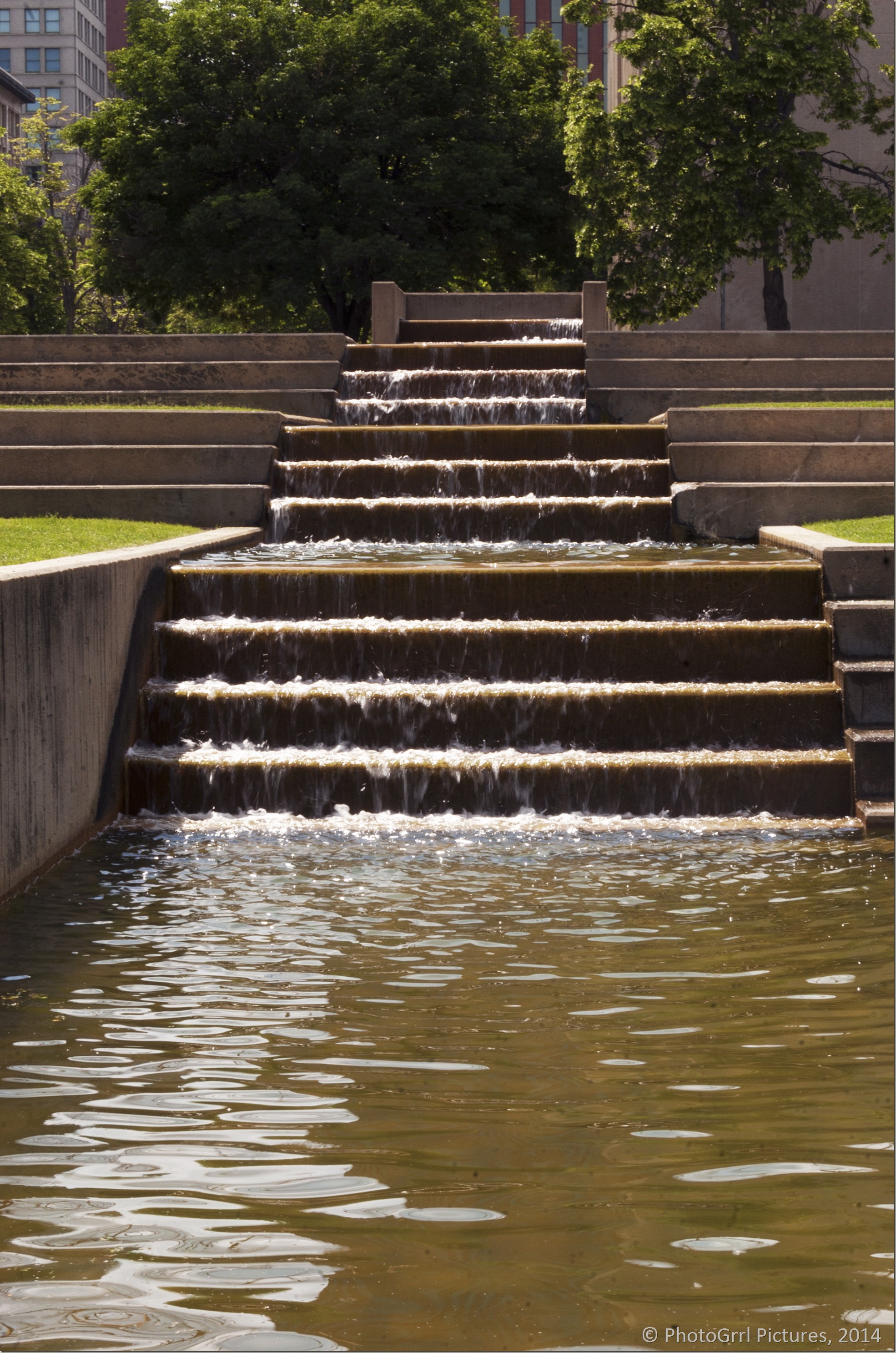 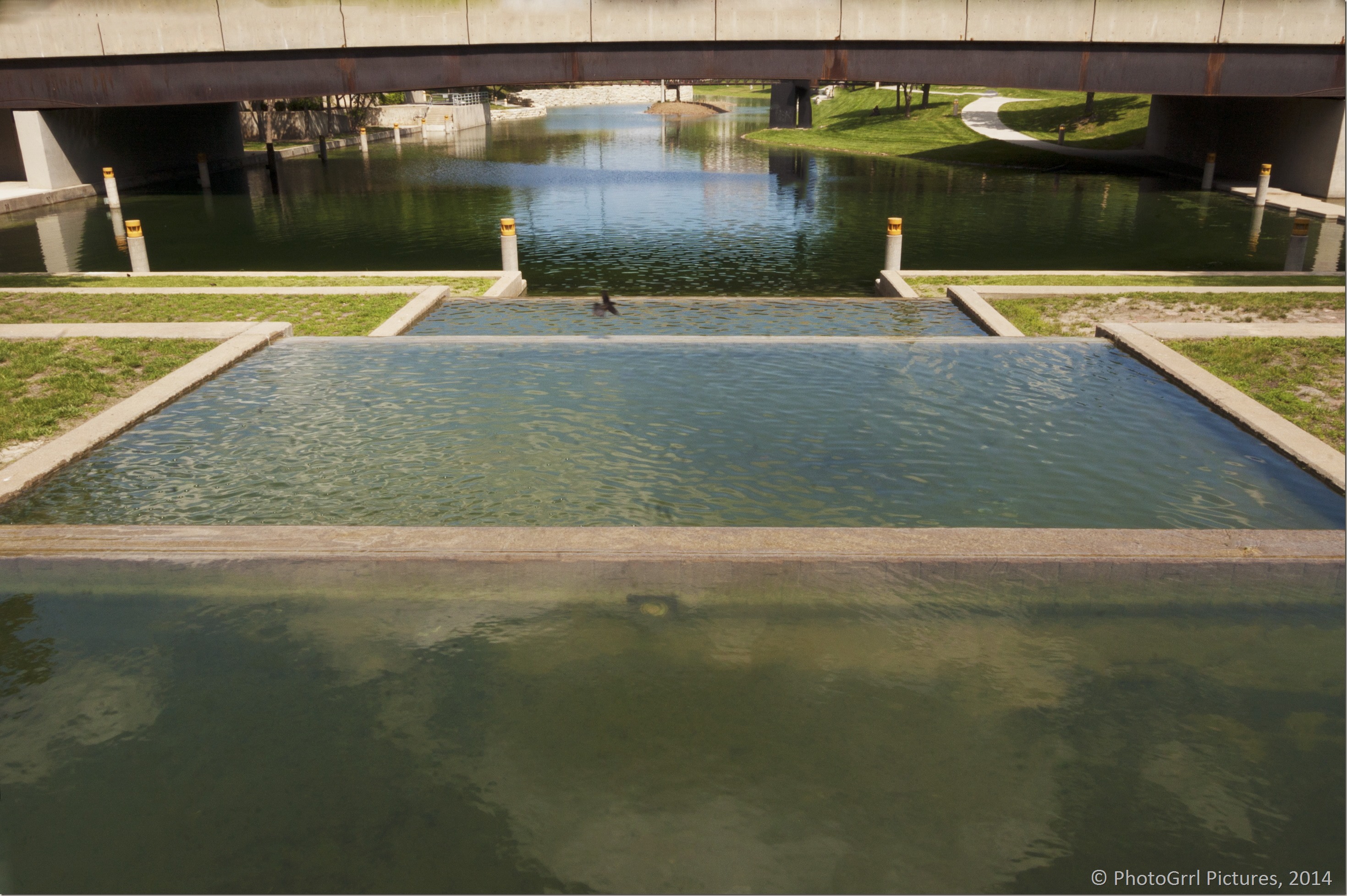 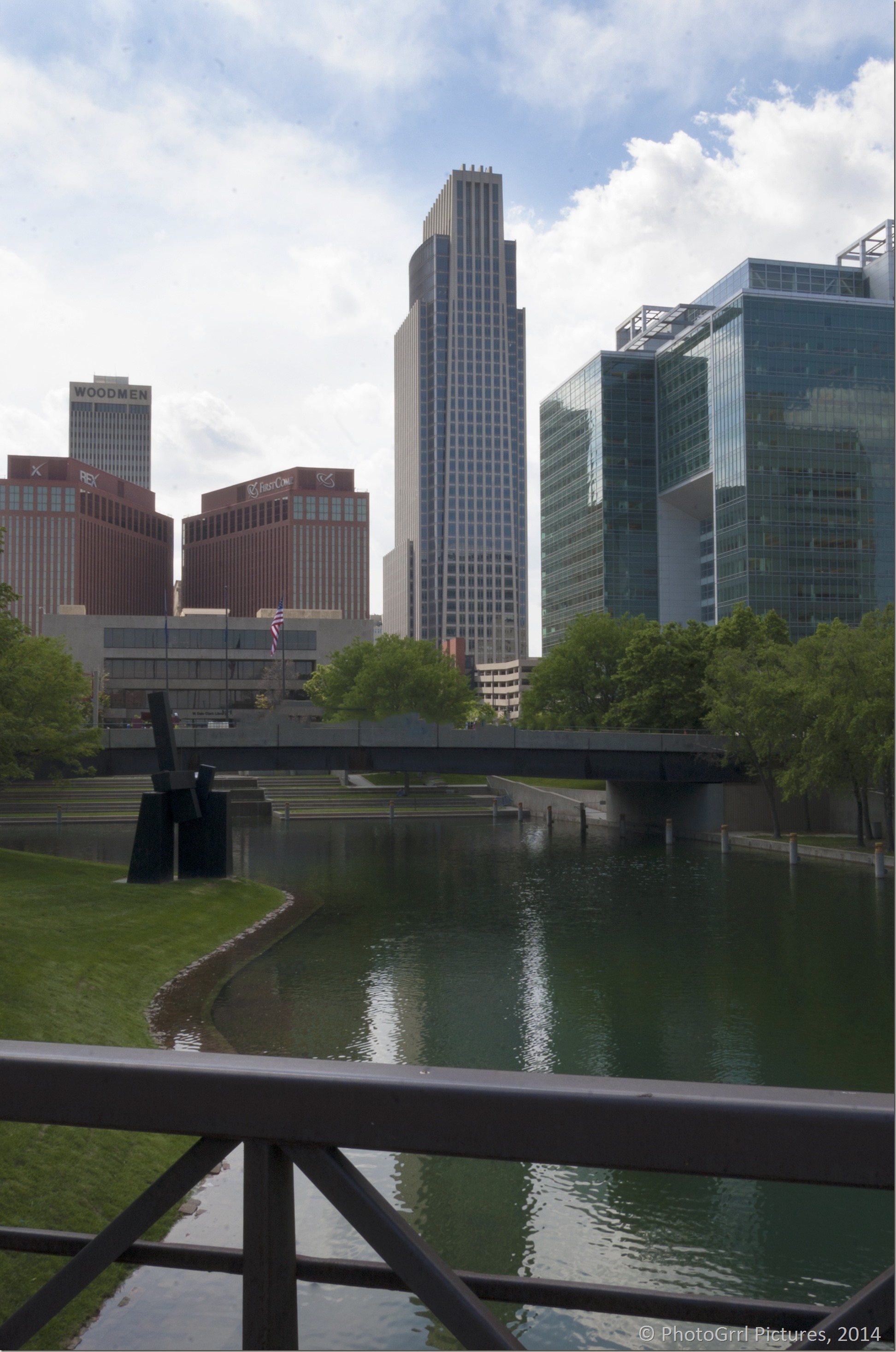 The Bob Kerry foot bridge angles across the Missouri River into Council Bluffs, Iowa.  I’ve heard the locals call it the “Bridge to Nowhere”, as there isn’t much on the Iowa side other than a small amphitheater, a suburban neighborhood, and a nice view of Omaha. 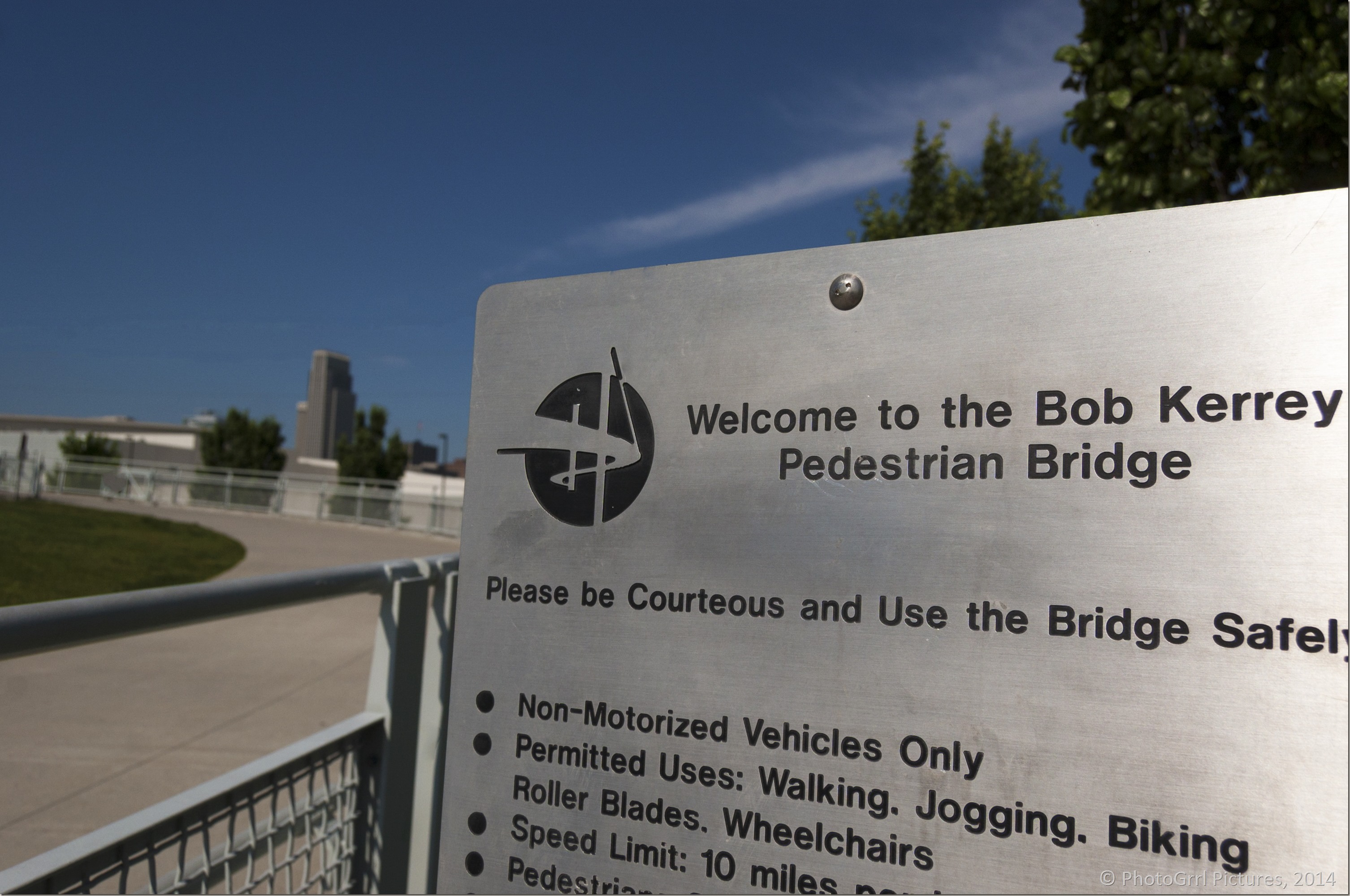 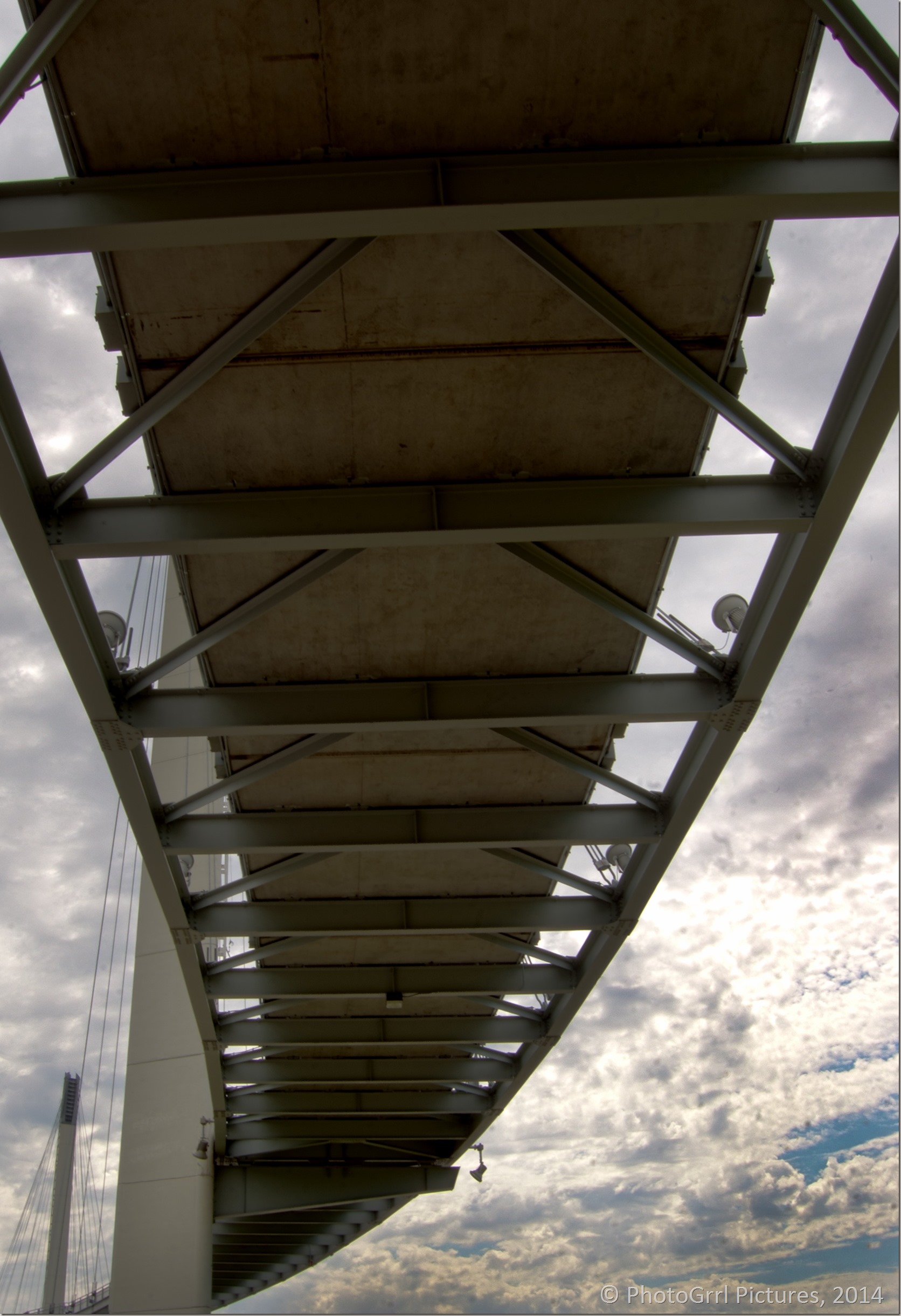 The people of the city are wonderfully down to earth, and the epitome of “real”.  Brusk without being brash.  Polite but not overly effusive. It’s not a city where strangers meet your eye as you pass on the sidewalk, or share in a polite smile of acquaintance.    Yet, the musician/waitress and local glass artist that I met were eager to share with me what they enjoy most about their city.

With only a day and bit of an afternoon to explore the city I regret not making it to The Old Market District.  Equally wish I could have gotten some late afternoon shots of the Jocelyn Art Museum and the Durham Museum.  But sunburn, and the uncertainty of being alone in an unfamiliar city near night held me back.   It’s the only time when traveling alone became a liability.